A dock leveler is a piece of equipment that is usually either mounted to the dock face or recessed into a pit at a loading dock door creating a bridge between a building and a transport vehicle.

Part 1: Most common types of dock levelers which include:

Part 3: Difference between a truck leveler and a dock leveler

Below you will find the most common types of dock levelers but may also include special designs that are unique to an individual manufacturer.

This type of dock leveler (also known as dock plate) is found in a recessed concrete opening in a building’s concrete at the dock door. There are three major sub-categories of such pit levelers:

1.1 Mechanical Pit Leveler: Also known as mechanical dock leveler, this is the most common of the pit leveler category and typically the least expensive. This leveler style uses a mechanical spring system to raise the leveler and is typical “upward biased.” This means that the spring is tending to force the leveler deck to rise up all of the time and a restraining device is preventing that motion. No electrical power supply at the dock is required for such a mechanical leveler. These levelers tend to be the most expensive to service and to maintain over their life. 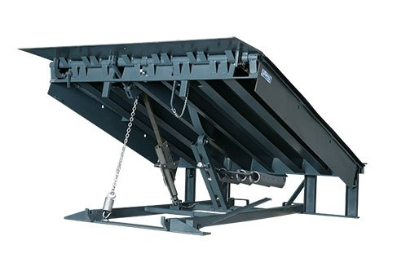 1.2 Air Pit Leveler: Also known as an air-dock leveler (dock plate), this type uses a pneumatic bag system of some type to raise and lower the leveler deck. Obviously, this leveler requires some type of electrical power source - either at the dock or adjacent to it. Most typically, this power source would be standard 110v power. Generally, these levelers are moderately more expensive than mechanical levelers but can involve reduced service and maintenance requirements when compared to mechanical units. 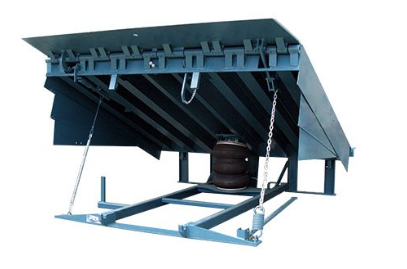 1.3 Hydraulic Pit Leveler:  Also known as hydraulic dock leveler (dock plate), this is the most versatile of the pit style levelers. A hydraulic cylinder is used to raise and lower the deck, while another is typically used to operate the lip. These levelers may come in various configurations and may be powered by everything from 110V single phase to 575V three-phase. The hydraulic option gives you more versatility than either mechanical or air dock levelers and typically would have lower service and maintenance costs. 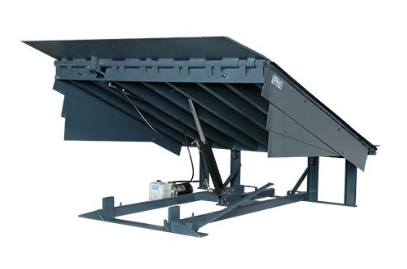 1.4 Vertical Dock Leveler:  A vertical leveler is exactly what the name implies - a dock leveler that is stored in a vertical position. Why is this desirable? This allows you to store the leveler inside the building and to close your dock door on concrete, instead of across the leveler, as is the case of a pit leveler. This should allow for better environmental control in your building. These vertical dock levelers are often used in foodservice applications or areas where wash down is an issue. Vertical levelers are typically pit or shelf-mounted and hydraulically operated. 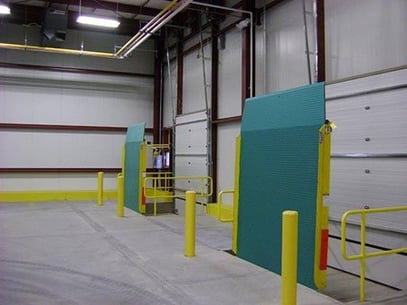 Rail Dock Leveler: These levelers involve a variation on the vertical leveler and are used to service rail cars. They are usually mounted on a sliding rail that allows them to move horizontally along the rail track. They may either be manually or hydraulically moved along the track and are typically hydraulically operated levelers. 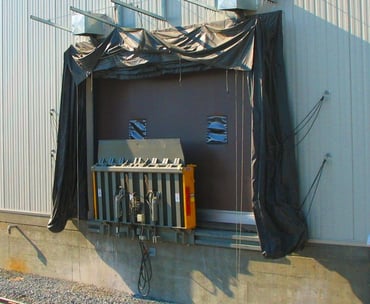 Edge of Dock (EOD) Leveler: This is a simple device that is usually mechanically operated but may be pneumatically or hydraulically operated. It is often found mounted on the exterior wall of a building with an integral loading dock bumpers set but may also be pit mounted. The EOD leveler has a limited vertical operating range and is geared toward applications where the transport vehicle bed is at, or very near, the floor level of the building (dock level). These units are generally inexpensive when compared to a pit or vertical dock leveler but may be considered an upgrade from portable dock boards as they are fixed to the dock face and have some form of lift assistance (mechanical, air, or hydraulic). A recommended normal working range of an EOD is typical +/- 3 inches.

- Activation System: The activation system provides the motive power of the dock leveler. These systems may or may not require external power interfaces. Typical activation systems are mechanical (springs), pneumatic (air bladders), and hydraulic.

- Attachments: This term refers to implements that can be added to a fork truck for handling a load. Attachments such as clamps, slip sheet forks and carpet poles can have an effect on capacity and should be considered in selecting a dock leveler.

- Bumpers: These are used to prevent the transport vehicle from contacting and damaging the building, dock leveler, or vehicle restraint. They are usually made of rubber. Loading dock bumpers sizes and projections vary, based on vehicles serviced and other factors such as driveway slope. 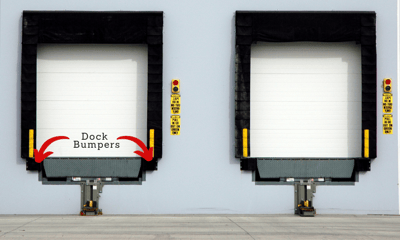 - Dock: This is the area of a building where loading and/or unloading of transport vehicles takes place.

- Dock Level: This term involves the vertical level that conforms to the building’s floor surface.

-  Dock Pit: The pit is the recessed opening in the building’s floor that accommodates the pit dock leveler. Most pits are lined along the edges with structural steel angles that are embedded in the concrete. 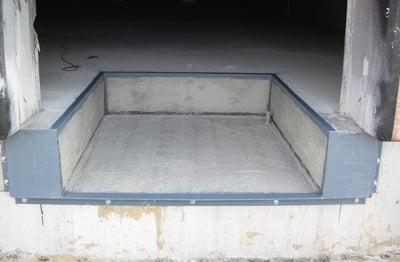 -  Frame: The frame assembly is the supporting structure for a dock leveler.

-  Gross Vehicle Weight (GVW): The GVW is the combined weight of the material handling equipment (lift truck, pallet jack, etc) and the load. In other words, it is the total maximum weight moving across the dock leveler.

-  Lip: The lip assembly is usually pivotally attached to the deck assembly and pivots from a vertical stored position to a position that rests on the transport vehicle’s floor. Lips are usually made with a tread plate that is similar to the deck.

-  Shim: These are steel plates that may be used to help level pit-mounted dock levelers. Shims may be placed under the frame structure and would be welded in place in order to provide a structural load path to the building’s foundation.

-  Toe Guard: It is a shield that is mounted flush to the side of a deck assembly in order to provide toe protection when the dock leveler is above dock level.

-  Transport Vehicle: This is a cargo-carrying vehicle such as a truck, semi-trailer, trailer, or railcar.

-  Working Range: The recommended range of vertical travel above and below dock level for which loading and unloading can take place.

Part 3: Difference Between a Truck Leveler and a Dock Leveler

A truck leveler raises the front of your truck to even out the overall stance of the vehicle, while the dock leveler (dock plate) creates a bridge between the truck and the loading dock covering the gap and making the loading/unloading of material safer. A truck leveler can be used when a dock is too high or low to service vehicles with a conventional dock leveler. It helps match the height of your loading dock. 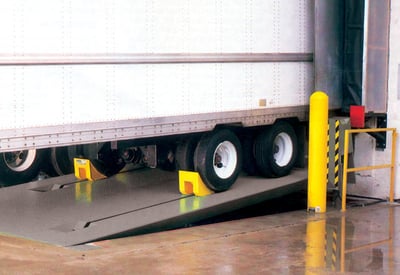 If you need a dock leveler, or any other loading dock equipment, call right away. One of our experts will be more than happy to help. We’ve been serving customers in the Central Jersey area for over 45 years.

Our residential and commercial overhead door and loading dock experts enjoy sharing our knowledge with our customers. We've been in business for over 45 years!